Welcome to your Friday cartoon recap where today we’ll be looking at what I believe is the only Halloween themed episode of Futurama. This was one of those shows that I didn’t truly appreciate during its run and only really came to love once it was being shown in marathons on Comedy Central.

I can’t tell you why I didn’t love it from the jump; maybe unfamiliarity, maybe the way it kept getting jerked around into different time slots all the time, I don’t know. But it took a while for this to become a show that I would think of as one of “my” shows.

In my research – the equivalent of Googling “Futurama Halloween” – I came across this episode and thought it’d make a fine addition to this cavalcade of blogs I’ve got going on right now. It’s Halloween Futurama-style. What could go wrong?

Before we really get going, I’d just like to say that Bender Bending Rodriguez is one of my favorite characters of all time and it was great to meet him at a Comic Con in Raleigh, NC over the summer. 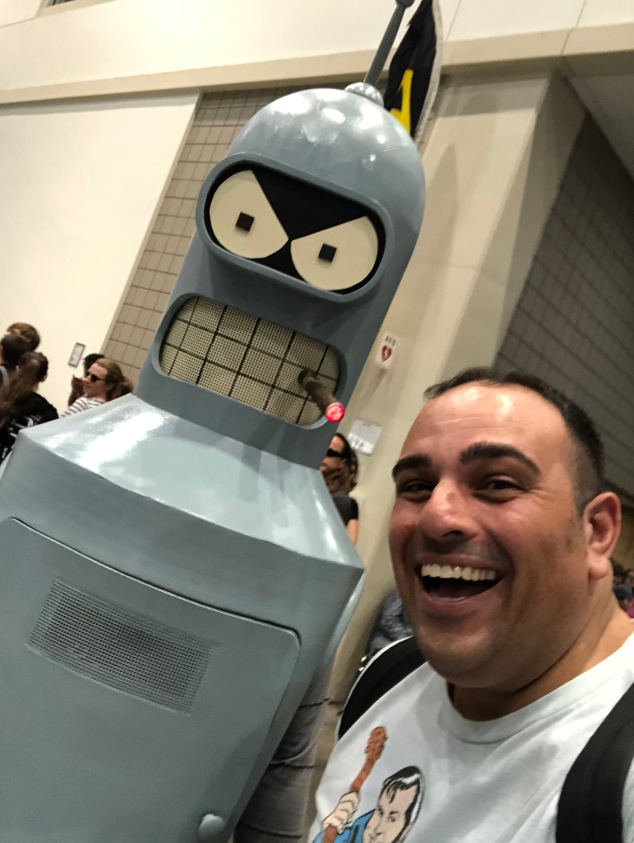 We open with Bender’s Uncle Vladimir having died. He’s super excited to see what he gets from his uncle’s will. The Planet Express team joins Bender for the funeral and then, at the reading of the will, Bender is left Uncle Vladimir’s castle which sits atop a its own mountain perch in a town that is very much like a robot-inhabited Transylvania. The one catch is that Bender has to spend a night within the castle’s walls to take ownership of it.

Right off the bat, the castle is fucking haunted. There’s robot ghosts everywhere and the gang is chased from the castle. Professor Farnsworth says there’s nothing to worry about, but Bender keeps running into an open plain where is mowed down by a runaway car who then stops to howl at the moon. A were-car!

Bender seeks professional help and pops a nickel into the fortune telling machine at the circus who tells him that, in order to break the curse, he must destroy the original were-car. If he doesn’t, his attacks will continue until he kills his closest friend. Fry is suddenly scared shitless so him and Leila take precautions by cuffing Bender to the wall in the hopes that this will prevent his were-car protocol from initializing at midnight. It is not successful.

At the stroke of midnight, Bender does indeed transform back into the were-car and speeds out in hot pursuit…of Leila which sends Fry into a jealous rage since he thought he was Bender’s closest friend the entire time. Leila uses a junkyard crane to contain Bender until he transforms back into normal Bender and then decide that they have to kill the original were-car in order to cure Bender.

They retrace their steps, going back to the scene of Bender’s accident only to find out that the car who hit him wasn’t the original were-car. So they find the were-car who hit that robot. And then then one who hit the robot who hit the robot who hit Bender. It brings them all to the noted robot actor, Calculon who tells them he’s not the original, but their persistence has them close. He was hit by the original were-car, named Project Satan, which was made up of evil parts from the most evil cars from all of history. Interestingly enough (for the sake of this blog’s time frame), this happened in 2019 before Calculon had made it big as an actor.

Fry, Leila and Bender track down Project Satan, but too late in the day as the clock hits midnight and Bender is once again transformed into a were-car. Were-Bender and Project Satan split up: Bender taking off for Fry and Satan settling on Leila and this makes Fry incredibly happy as Bender trying to kill him means that they must be best friends. After a quick chase, both Were-Bender and Project Satan hit ramps from opposite ends that send them over a line of school buses. Both are able to clear the buses, but Project Satan’s ramp comes up right before a furnace without enough room to stop and he is incinerated and vanquished. Bender, still in the air is transformed back to normal and the scare of the were-car has been eliminated.

I told you earlier this became one of my shows and this episode did nothing to change that for me. It was silly, it was fun and I genuinely love all these characters. I mean, literally as I write this, I’m wearing a Dr. Zoidberg t-shirt because he’s the best and he absolutely shined in the 10 seconds of screen time he got in this episode while trying to push make-up.

Futurama is/was great and I hope everybody comes to appreciate it for its incredible consistency of quality throughout its run. There’s really so much goodness in there and even the stuff that isn’t “all-time great” is still damn good and better than an awful lot of other shows’ best.

So did I like today’s episode? Yes, very much. Will you like it? If you’re the type of person that has two eyes and a heartbeat, then yes, I’m willing to bet you will as well. I know this series was on Netflix for a long while, but I watched it today on Hulu since I’ve been watching a ton of stuff lately on Hulu. Either way, if it’s been a while since you’ve run through this, maybe stop your 18th rewatch of The Office and give this another look. You won’t regret it.

One thought on “Daily Cartoon: Futurama S03E01 “The Honking””