Welcome to another Halloween themed cartoon recap! Today we’re checking out an early episode from Rugrats which was absolutely huge in the 90s. I’m serious. This show was so popular that kids, older kids and adults were all rocking merch from it.

Toys, video games, apparel, you name it, and this show had it. You know you’re over when you even get a tie-in with a fast food chain and…

Hell, during senior year, my buddy Armando (who is definitely not a doctor) even had a Burger King Rugrats watch from their promotion with the movie out at that time that actually said phrases!

But today we go all the way back to Season 1 of this cartoon classic and cherry pick a Halloween episode. I’m very excited for this. It has to be way better than yesterday’s Garfield atrocity. The bar is set low so let’s fucking go!

Now I’ll admit to not being the biggest of Rugrats fans during it’s run, but I definitely liked it. I don’t really have any standout memories of it…just that I really wished Reptar Bars were an actual thing just because I would have tried a new candy. (Editor’s note: they eventually DID become a real thing!) 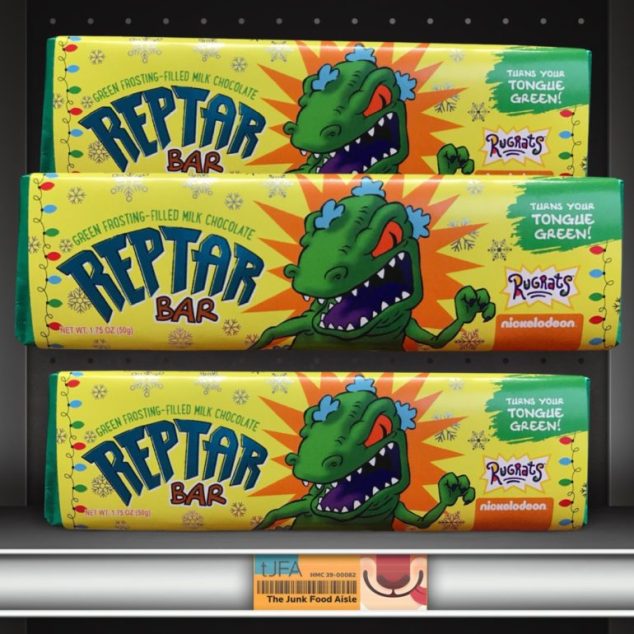 Our first story is Candy Bar Creep Show and it opens in the Pickles’ kitchen with Tommy sitting in a high chair while his mom, Didi, carves a Jack-O-Lantern. So far, our Halloween theme is on point.

Tommy’s concerned about how weird the grown ups are acting with these pumpkins and he lays it out for Phil, Lil and Chuckie. Angelica comes by and shows of – you guessed it – a Reptar Bar. This must be the introduction of the Reptar Bar as the babies have no fucking idea that such a thing exists and then Angelica sings a song about it. Fuck, I want one now.

The grown ups are working at setting up a haunted house and Didi thinks it’s way too scary for the kids. Grandpa disagrees because he’s old and thinks today’s kids are a bunch of fucking pussies.

The babies are entranced by all this nonsense. They think masks are second faces and even though kids run screaming from the haunted house, the babies want in because they see the trick-or-treaters leaving with Reptar Bars in their hands and they want them some of that! They try screaming as a way to get the candy, but Didi and Stu just pull the blinds shut thinking the kids were scared of the trick or treaters.

They decide you must have to scream while inside the haunted house to be able to get a Reptar Bar and proceed to escape their playpen and head for it. They need those fucking Reptar Bars. A group of kids come in and you can figure out what happens: the babies knock into a few things and end up looking like zombies and ghosts which scares the bejesus out of the group. They drop their candy sacks and head for the hills which allows Tommy, Phil, Lil and Chuckie to collect all the deserted Reptar Bars and take them back inside where no parent has even noticed that they had escaped. They love their Reptar Bars and how it turns their tongues green and now I want one even more than 8 minutes ago.

Moving on to Monster in the Garage now which opens with a bang. Really a bunch of paint cans just fall off the shelf in the garage and everybody freaks out thinking it was hoodlums who vandalized it before settling on blaming Spike the dog.

Tommy is tight at the grown ups for making Spike go outside in the doghouse when he didn’t do anything wrong, but he’s a baby and he can’t talk to adults nor does he have any rights or say in the matter.

The grown ups decide to go out for the night and leave the kids with an elderly couple where the old man tells them a scary story about a monster which makes Tommy think that it was a monster who knocked over all that paint in the garage. I will admit: at least he’s trying. The parents just up and blamed the fucking dog like it ain’t no thang.

At that moment, a bunch of books start falling in the living room which end up knocking over a lamp and causing a ruckus. Stu goes looking to blame the dog again, but Spike is tied up outside so it definitely wasn’t him. Shit, maybe it really was a fucking ghost.

The babies once again break from their playpen with ease to go investigate the crime scene in the garage confident that they’ll take down this monster who keeps getting Spike in trouble.

After causing a mess of their own in the garage, the kids come to find their monster: a mouse. Just a regular old mouse in the garage that scares the living piss out of Stu when the parents come to check on the noises they heard. Stu screams for Spike to come help and the faithful dog gives a polite bark to scare off the monster mouse and save the day. Spike is allowed back in the house and the babies forever have a story of catching their first monster.

As I said earlier, I wasn’t a huge Rugrats fan back in the day so there’s not a lot of sentimental attachment here, but this was pretty fun. Was it the greatest thing ever? No, not at all, but it was a worthwhile watch that entertained the whole way through.

Because the babies are always talking amongst each other you forget that they’re still babies and have to learn even small things such as what a mouse is. It’s a cool little dynamic that reminds you that kids just make up a bunch of shit and have their own language when they’re around other kids, but they’re always listening, watching, judging.

This was their first Halloween and it’s cool to seem them try to piece it together from afar and not understand the concept of costumes or masks and interpret a kid taking his mask off as a kid completely removing his face and being amazed by it.

If you didn’t know anything about Halloween and just had to figure it out for yourself while watching it happen around you, you may think similarly. Halloween is fucking weird. We really let strangers give candy to our kids after preaching to them for the other 364 days of the year to avoid strangers as if they have the goddamn bird flu.

But these kids don’t give a shit. They don’t even know that yet. You know what they know? That Reptar Bars exist and that they fucking want them.

And that’s what Halloween is all about.