As we stand on the precipice of the end of another baseball season, we finally get the part where we argue about awards!

This is the second year that I’ve had a ballot in the IBWAA (Internet Baseball Writers Association of America) year-end awards selection and, as I said last year, it’s something I take pretty seriously because I completely understand how serious fans take it.

Trust me, I got hammered last year on Twitter with people who vehemently disagreed with my ballot and while I felt I was able to justify selections, it did serve as a reminder to ensure that no fuckery occurs.

This was a helluva season, wasn’t it? Big injuries, bigger homers, fun streaks and disappointing, wastes of seasons (coughMetscough). All that action is setting up for a very fun October with a number of intriguing postseason matchups, but before we get there, we have to give out some awards. Final tallies will be revealed after this weekend, but – in the meantime – I can tell you where my votes went. So here we go: fuckery not included.

MANAGERS OF THE YEAR

In the America League, Paul Molitor may have done the most with the least seeing as how there’s still only a handful of guys on the Twins that I can actually name. Add in the fact that they became sellers at the deadline and you can certainly make a case for him.

While I don’t discount that way of thinking, I do think there’s something to be said for keeping the good teams playing well consistently across the full length of what is a very long, arduous season. The Astros bolted out to a large lead early on, but were eventually caught by the Indians. Both Terry Francona and AJ Hinch did great jobs managing injuries and pitching staffs and also dealing with cold streaks (and a historic hot streak in the Indians’ case) while keeping their squads close to or at the top of the leaderboards. In the end, I don’t think there’s a wrong answer, but I love Francona, the Indians are the best team in the AL and that winning streak they rolled off is impressive as hell.

As for the NL, I’ve been really impressed with the Diamondbacks all year. People were ready to write them off after a disappointing season last year, but Torey Lovullo was able to turn the tide in his first season at the helm and has his squad ready to go into the playoffs as a legitimate threat to make a deep run.

People are going to question my vote for Andy Green of the Padres here, but for a team that from the outside looked to be tanking as hard as possible, the fact that this team has won 70 games going into the final weekend while playing in a division that features potentially three playoff teams is impressive as fuck. Sure, I don’t know of many managers of 70 win teams that get awards like this, but c’mon, this is a team that was letting Jered Weaver stand on the mound for 42 innings so he could feature what was left of his Little League fastball. Good job, Andy Green.

RELIEVERS OF THE YEAR

In both leagues, these are pretty much slam dunks in my eyes. Both Craig Kimbrel and Kenley Jansen have had absolutely terrific seasons and, while they did give me three spots to fill in each league, all you really needed was one.

Roberto Osuna, Corey Knebel and others had nice seasons, but didn’t hold a candle to those by the top guys. Outside of Rookie of the Year, this is probably the most obvious cut and dry category we’re voting on this year.

Seriously, look at these numbers:

ROOKIES OF THE YEAR

If you’ve followed baseball at all this season, this is no surprise. Do I even need to explain this? Because I’m not going to.

The NL race was pretty much a gimme. Max Scherzer is great and even though I hate him because he plays for the Nationals, I can’t deny him. He gives you innings, strikes out a ton of hitters and is a true workhorse ace in an era where that doesn’t really exist anymore. We’re at a point with Scherzer now where he’s just adding to his case for the Hall of Fame. He’s been that good.

In the AL, it looked like Chris Sale was running away with this for a long time, but as the season went longer, he slowed down and Corey Kluber put it into overdrive. I’m a huge fan of Kluber and love watching how precise he’s able to work both sides of the plate.

There are some numbers in Sale’s favor: he has the lead in IP and a monster lead in strikeouts, but Kluber has him in Wins (if you still care about that), a significant lead in ERA and is also ahead in metrics like ERA+, WHIP and WAR.

It may be a recency bias because Kluber is finishing stronger than Sale, but when looking over the full body of work, I still go Kluber. I can see people making an argument for Sale, but would find it rather impossible to make one AGAINST Kluber. 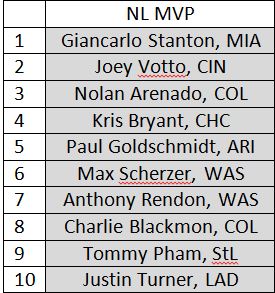 You ready to have some fun?

If you know me, read my writings or even listen to my podcast regularly, you know that nothing would have made me happier than to be able to vote for Mike Trout and Bryce Harper and call it a day. Punch the clock, go home and go to bed content in knowing that baseball’s two biggest stars did what they’re supposed to do and just killed it.

Unfortunately, my master plan was destroyed and rendered useless with both players missing significant time to injuries. Although Trout was still able to put together great numbers when considering that he missed six weeks, he wasn’t able to do enough to be able to claim top honors this year. It’s sad. I’m sad. We should all be sad.

However, that opened the door for someone new to claim the award in the Junior Circuit and it really comes down to two players: Jose Altuve and Aaron Judge. Both have had incredible, but very different seasons because of the type of players they are. Judge with his historic power numbers and Altuve with his sparkling offensive numbers across the board while playing an up-the-middle position.

In the end, I chose to go with Altuve because of the value he brings at a more premium defensive position as well as what he’s able to do on the basepaths as well as being the main man on a team that has been at the top of the division since what feels like Opening Day. While he didn’t touch Judge in power numbers, you’d probably be surprised that Altuve is just six homers shy of a 30/30 season and has over 80 RBI while hitting at the top of the order.

That is not to take anything away from Judge who has clearly been the biggest of reasons the Yankees re-build seems to be ahead of schedule, but it’s a sense of what you value most. For him to put up close to an 8 WAR season as a rookie if fucking insane and the fact that he was able to rebound from a deep, second-half slump to finish with a thunderclap should make Yankee fans feel secure in knowing that he’s for real going forward.

The NL MVP, however, didn’t have those clear-cut options or even limited selections like its AL counterpart. I could have easily put any of five guys in that top spot and felt like I was doing the right thing.

As I kept combing through numbers, I was able to finally get it down to Giancarlo Stanton, Joey Votto and Nolan Arenado as a Top-3 and from there it became again, where do you see the value?

Arenado is the best player on a surprising Rockies team that looks as if they’re going to lock in a Wild Card appearance. His numbers are aided by Coors Field, obviously, but you can’t fault him for where his team plays. He’s also the best defensive third-baseman in the game. If you haven’t seen much of him beyond just highlight shows, you’re missing out. Even the routine plays he makes look incredible because of just how easy he makes things look.

Joey Votto may be my favorite player in baseball. You don’t need to be a pro scout to watch him hit and see that he does things differently from everybody else. He chokes up, he hits for power and he’s cut down his strikeouts by a third this season in a year when it feels like everybody else’s numbers have gone up by at least that much. He’s put up an incredible 7 WAR season in his age 33 year and would have been my pick if it wasn’t for…

We know the deal. The ball is juiced, everybody hits homers, people strike out too much and old people fart when they walk and don’t even notice.

Yes, we saw a record set this year for total numbers of homers hit, but nobody has touched absolutely big numbers except for Stanton and Judge. And you can’t tell me that either of those two wouldn’t be hitting a fuckton of homers even with an unjuiced ball.

It feels like we’ve been waiting forever for Giancarlo to finally stay healthy so we could see what he could do in a full, uninterrupted year and he didn’t disappoint. As of now he’s one homer away from 60 with a final weekend series in Colorado on the schedule which he just has to be foaming at the mouth over. Three games to go, 15 home runs away from setting a new single-season record. I, for one, hope he does it.

This was a year where nobody ran away with and separated themselves in the National League. For a long while, Paul Goldschmidt looked to have a lock on things, but had a drop-off, meanwhile, Kris Bryant – the defending MVP – rebounded in a big way after a slow start and made a big push with getting the Cubs turned around after they looked to have been hit hard by the championship hangover through the All-Star break.

The NL race is going to be close and quite a few people are going to get first-place votes. I’m going with Stanton because he’s been head and shoulders above the rest of the pack in a year where everybody hits homers as well his excellent play in right-field. We finally got to see the year we’ve dreamed he was capable of.

So there we go. Awards have been voted on and, like I promised, fuckery was kept on the shelf. Feel free to let me know how I did (because I know you will anyway). On Twitter: @ImElShoes or by e-mail: ShoesOnSports@gmail.com.