Welcome back to the Daily Cartoon! Today we went back in time machine and pulled out something new. But before that, remember to listen the weekly show, The Car JoeMez Podcast on iTunes, Soundcloud or wherever you get your podcasts. Subscribe, leave a review, tell a friend. We love that stuff.

Today’s cartoon is The Dick Tracy Show. When the movie starring Warren Beatty and Madonna came out in 1990, these episodes got a new life on TV and I loved them. Hell, everybody loved Dick Tracy for that one summer. He was everybody’s double-main-man. That didn’t last very long as the movie was trash and the cartoons disappeared, but pretty much everybody I knew then had some kind of DT merch whether it was t-shirts or action figures. Dick Tracy even got my most favorite tie-in of all: an officially licensed Nintendo game! 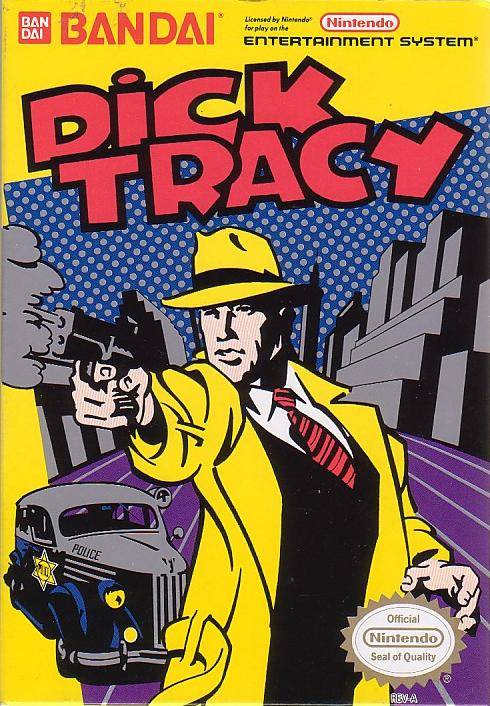 Sure, it was also available on GameBoy and I think even Sega Genesis, but this was the only one I ever played so it’s the only one that matters. I actually bought a copy of this game again a few years back so I could relive all the good times. To my chagrin, there weren’t many good times to be had.

Let’s talk about the cartoon, though, since that’s the reason we’re here. It was originally produced in 1961 and featured one season of 130 five-minute episodes. That was something I didn’t remember. I wonder how many of these five-minute episodes they would show each day. That’s weird.

The show actually got pulled from syndication in the 1970s because of the ethnic stereotypes and racial undertones featured in the show. Now THAT is something I really don’t remember! But, all of a sudden, I’m soooooo looking forward to this.

A lot of these episodes are uploaded in pretty good quality on YouTube, so after a quick scan, I just picked one with a fun-sounding title. Being that this is only a five-minute episode, I don’t expect this recap to be very long, but if they jam-pack this five-minutes with racist undertones….oh, man. I am excited.

We open with our man, Dick Tracy, sitting in his office and finishing up a phone call with the Chief. Tracy uses his wristwatch communicator to get in touch with Hemlock Holmes, who is a dog, about The Brow and Oodles who are planning a break at Sing Song State Prison. He tells Hemlock to get over there ASAP to foil these plans.

As Hemlock approaches, the alarms start blaring from the prison as The Brow and Oodles come bouncing from behind the walls while strapped in to electric chairs.

You know what this calls for.

First off, yes, I said “bouncing”. Literally hopping as if the electric chairs they’re in are goddamn pogo sticks. They bounce, so high, in fact, that they fucking Super Mario stomp Hemlock Holmes as if he were a goddamn Goomba.

Secondly, and perhaps more important, THEY ARE STRAPPED INTO FUCKING ELECTRIC CHAIRS!! What the fuck kind of prison is this?! How bad are these prison guards if they’re letting two guys – apparently just moments away from being fucking fried – escape by using these chairs as trampolines to make their big break?!

Hemlock radios to the real police and tells them to cut off the criminals on the bridge. Instead, said police drive off the fucking bridge and into the river. Like just straight off as if they planned on it the entire time. This town is filled with the absolute worst of the worst when it comes to police and prison guards.

The Brow and Oodles decide to lay low in a hair salon since their electric chairs will fit right next to the line of women there to get perms. As far as everything has gone thus far, this actually makes sense. It probably would have worked too, but a hairdresser sees that their chairs aren’t plugged in. When she attempts to rectify that, our villains are shocked into the sky and clear out of their shackles. They run out of the salon and into a construction area where Hemlock just happens to be waiting for him. They sucker Hemlock into chasing them and he knocks him senseless by running face-first into some wooden planks.

The evil-doers take this opportunity to whip up some instant cement and plant Hemlock’s feet into it. I assume that his days are numbered, but I cannot wait to see the retardedness that will come from him eventually escaping.

They carry him over to the pier and just as they’re about to toss him into the river, Hemlock Holmes yells, “Hold everything!” Everything freezes. Shit on a stick, Hemlock Holmes just called a Zack Morris Time-Out!

He radios Dick Tracy on his watch-communicator not to ask for help or to tell Tracy that these motherfuckers – who just minutes ago were about to get executed – are going to throw him in the river, oh no, Hemlock fucking Holmes tells Tracy that he’s “about to be at the bottom of this case”. Dick Tracy says good job and next thing you know, Hemlock is at the bottom of the river with his feet locked in cement.

Personally, if I were Hemlock, I would have done things differently, but what do I know? I’ve never been on the precipice of certain death and needed to use my time-out lifeline. Just one man’s opinion.

While Hemlock should be drowning and enduring a horrible death, he’s rescued by The Retouchables – that group of idiot cops who drove off the bridge earlier and have just been driving around on the floor of the river ever since. I think now’s a good time to pour myself a Tito’s.

The Brow and Oodles assume they’re home free at this point, but Hemlock and The Retouchables just pop up out of nowhere and are now in hot pursuit. The baddies run into an ice house to hide. An ice house is, apparently, something you go to when you need ice for your house. It’s like a giant ice vending machine. I guess we still didn’t have the means to make our own ice at home in 1961.

Some Mr. Magoo looking motherfucker stops by to get ice and when he puts in his money, The Brow and Oodles come out encased in frozen blocks. Hemlock shows up and radios Dick Tracy that he’s saved the day. Tracy approves.

The five-minute episode was something I literally did not at all remember. I figure something like that would stand out, but – looking back – this isn’t something I watched outside of that period where the movie came out and this was back on TV.

I’m going to assume that this was a good little cartoon for the time. I can safely say it’s not a good cartoon today. I don’t think I’ll ever be able to get over the bouncing electric chairs. Ever. Years from now, I could be in the middle of a passionate love-making session with a local exotic dancer and this may cross my mind and I’m due to have an aneurysm.

One thing I’m really upset about is that lack of all that racial stereotyping I was expecting. Of course, I just happened to pick the wrong episode, but it’s always crazy to look back at things from a different time and see what was socially acceptable that wouldn’t even come close to flying today.

If you want to check this out, there’s a ton of episodes up on YouTube in great quality. I don’t know if the user DVD-ripped them or whatever, but the quality is terrific.

I’m glad I was able to track this down for the nostalgia, but now that I have, I never have to revisit it again.

Thanks for coming through and I’ll see you tomorrow.